From Not Talking to Thriving: First-grader Overcomes Speech Delay 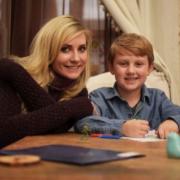 Jennica and Aubin Wahl enjoy some family time at their home in Ferndale. Aubin, who didn’t speak until he began receiving special education and speech therapy services through Build Up Michigan at age 3, is now a thriving first-grader in the Royal Oak school district. (Photo: Luke Pline)

For most parents, hearing their 3-year-old say the word "ball" is a common occurrence.

For Jennica Wahl of Ferndale, it was nothing less than an "awesome" experience.

That's because until he was 3, her son, Aubin, hadn't uttered a sound.

But within a few weeks of beginning preschool special education services provided through the Build Up Michigan program, Aubin started using his voice ­– including speaking his first word, "ball."

Today, after three years of classroom activities and speech therapy, Aubin is a thriving first-grader in the Royal Oak school district who no longer requires special education assistance.

"He's gone from being delayed to being above average," said Jennica Wahl, proudly noting that her son is a particularly strong reader.

The power of early intervention

Aubin's case and many others like it statewide highlight the importance of identifying and addressing developmental delays in children as early as possible, said Christine Callahan, director of innovative projects for the Clinton County Regional Education Service Agency, which administers Build Up Michigan.

The program's mission is to provide free, preschool-based assistance to Michigan 3- to 5-year-olds who need it to become ready for kindergarten.

"The evidence is clear that early intervention improves and enhances the development of a child because learning is at its highest rate in the preschool years," Callahan said.

As her concerns about Aubin's lack of speech grew, Wahl contacted Build Up at the urging of her mother, a preschool education specialist.

Aubin would point to numbers and letters, indicating that he understood those concepts, but he simply would not vocalize his thoughts.

"We were wondering what his voice even sounded like," Wahl said. "We were definitely concerned about it."

A special education evaluator screened Aubin at his home and arranged for him to receive preschool services at Gudith Elementary in the Woodhaven-Brownstown school district, as well as speech therapy through Henry Ford Health System.

"It was awesome to hear him speak."

Initially, Wahl and Aubin were taught rudimentary sign language so they could communicate about basic concepts such as food and drink. But within a month of beginning his preschool and speech therapy regimen – which included learning how to manipulate different muscles in his mouth – Aubin used his voice for the first time.

"It was awesome to hear him speak," Wahl said. "He had a little struggle at first, but he's been quickly improving ever since."

Aubin continued to receive speech training as a kindergartner at Erving Elementary in Woodhaven-Brownstown and as a first-grader this past fall at Keller Elementary in the Royal Oak district.

When Aubin returned to school this month, Wahl was informed that he was speaking at an age-appropriate level and no longer required additional services.